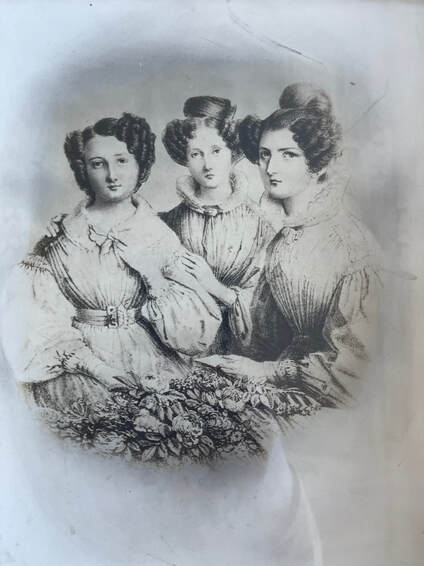 The Byrne Darcy girls Miss Eliza Caroline, Miss Mary Patricia and Miss Byrne Darcy. Sketch courtesy of Brian Dempsey.
Byrne Darcy of Drummartin & Dublin City
​
Patrick Darcy was a coach owner and had a post-chaise business at 22 Bishop Street (Booter
Lane) from circa 1773.  He ran 50 horses and 30 coaches from his premises which had a
granary, forge, workshops for repairs and covered an area of 120 square feet.  He ran a coach
service between Dublin and major towns around Ireland including Armagh, Roscommon and
Galway.

Patrick leased the lands of Booter Lane in 1774 from Robert Byrne for 500 years.  He leased
Drummartin from Lord Fitzwilliam through Mrs Fegan, the land agent in 1781.  In 1754 this
townland had 1 house, 1 quarry and a Holy Well called St Fountains.  He was listed on the
Convert/Qualification Roll of 1778.  He died and was buried in St Peter's Parish on 11 Feb 1803​.

His son in law Anthony Byrne took over the business and Anthony Byrne & Son obtained a
contract from the Grand Canal Company in 1805 to bring passengers by coach to and from
Portobello.  Anthony Byrne got ill during the spring of 1809 and the business was put up for
sale along with two dwelling houses.  Anthony died intestate on 30 Aug 1809 aged 58 at
Marlfield (Old Bawn), Co Dublin.

1               Anthony Byrne Darcy born circa 1774, grandson of Patrick Darcy of Drummartin married
Marianne Murray, daughter of Pat Murray, brewer of 5 Ellis Quay and leasee of Marlfield
on 8 Feb 1809.  He disposed of the Coaching business in 1809 and Catherine Byrne
disposed of leases on houses in Bishop Street and Kevan Street as well as a lease on
81 acres at Ballinascorney.  Anthony was a member of the County of Dublin Reform
Registry Association and the Loyal National  Repeal Association. He was a landlord and
lived at many of his holdings over the years, Buckingham Street, Campfield Tce, 21 Sydney
Ave and Rathmines.  Marianne died 19 Nov 1855 at 52 Wellington Road and was buried at
Glasnevin.  Anthony died at Castle House, Little Bray on 12 Jun 1859 and was buried with
​                 his wife.

2          Patrick Byrne Darcy, eldest son born 12 Mar 1817 at Drummartin, married Emily
Conway, daughter of newspaper printer and notable book collector, Frederick
William Conway, of St Kevin, Upper Rathmines in August 1848.   Patrick was a corn
merchant trading as P & A Darcy and operating from 111 Middle Abbey Street
and London.  He became a director of the Hibernian Joint Stock Banking
Company in 1864.  The family lived at 1 Oaklands Villas, Rathgar and Castlewood
Avenue but by 1871 was living at Dunedin, Monkstown.  Patrick was a member of
the Chamber of Commerce, was a Commissioner of Irish Lights and a member of
the Ouzel Galley Society.  He was deputy governor of Hibernian Bank in 1871 and
governor in 1875.  Emily died 10 Jul 1878 aged 52 and Patrick died 1 Jul 1882 aged
63 at 'Dunedin', Monkstown and was interred at Glasnevin.

2        Charles Byrne Darcy born 1 April 1852 at St Kevin, upper Rathmines Road
was the executor of his father's Will.  Charles of Drummartin died at Ormond
Terrace in May 1883.

4        William Byrne Darcy born circa 1857 was a clerk in a wine Merchants and
died a bachelor at Londonbridge Road in 1915 and was buried at Glasnevin.

1         Constance Eleanor Mary (Ella) Byrne D'Arcy born Pimlico 1857 was educated
in London, Germany, France and the Channel Islands.  She was a student of
fine art before becoming an author.  She spent her final years living in Paris,
and returned to London in 1937 where she died the same year.