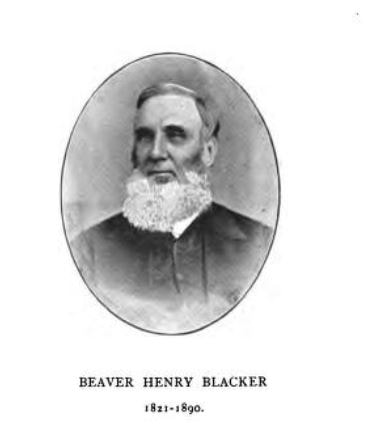 A photograph by Cox of Clifton of Rev Blacker used in his obit.
Blacker family of Booterstown

Latham Blacker was born circa 1794 son of Beaver Blacker and Susan Blacker (cousins).  He
was apprenticed to George Pentland, attorney and admitted to Kings Inn in 1810.  He married
Catherine miller in April 1820.  Catherine was the daughter of the Rev Dr George Miller,
headmaster of the Royal School of Armagh and Elizabeth Ball.  The couple had at least nine
children.  Latham an attorney of 10 Fitzgibbon Street, Solicitor of Customs, lived at Airfield,
Donnybrook from 1841.  He was appointed solicitor to Customs of London in 1849 and took up
residence at Hyde Park, London. The family were living at Gloucester Terrace, Kensington in 1851.
Catherine was travelling with two of her daughters and was injured in the Straffan rail crash of
5 Oct 1853.  She suffered scalding, a compound fracture of the leg and broken ribs.  The coach
was completely crushed and their survival was thought to be miraculous, but it transpired that
Catherine’s injuries were more serious than first thought and she was kept at Straffan station
for weeks before being moved to the Kingsbridge Hotel where she died from her injuries on
14 Dec 1853.  By 1860 Latham was living in Co Tyrone and was appointed to the Commission of
Peace for Tyrone in 1861.  Latham died 20 Apr 1872 at Glenkeen, Co Londonderry and left 6K in
personal estate.

He secondly married Sophia Eliza O'Reilly on 18 Aug 1855 in Monkstown.  Sophia was a
minor and the daughter of Hugh O’Reilly.  In 1857 he was appointed to the vicarage of
Booterstown and he lived at 30 Waltham Terrace and bought Rokeby House in 1858.  He was
secretary of the Protestant Orphan Society and appointed rural Dean in 1862.  He published
'Brief sketches of Booterstown and Donnybrook, in the County of Dublin, with notes and
annals, issued in four parts' between 1860 and 1874.  He resigned as rector and rural dean
in 1874.  He was presented with a solid silver epergne by the Booterstown parishioners and
Sophia was presented with a gold watch.  The family moved to England and Beaver was
curate-in-charge of Charlton Kings, in Gloucestershire from 1875 to 1876, and senior curate
of Cheltenham from 1876 to 1878.   He lived for three years in Stroud and moved to Clifton
in 1881.  He was a member of the Clifton Antiquarian Club and Gloucestershire
Archaeological Society and contributed to the Dictionary of National Biography.  He edited the
'Gloucestershire Notes and Queries', an illustrated quarterly magazine of the history and
antiquities of Gloucestershire published from 1879.  Sophia Eliza died at 2 Paragon Buildings,
Cheltenham 27 Jul 1876 aged 39 and her remains were laid at Deansgrange with 'those of her
sons who went before her' at Deansgrange.  Beaver died in Clifton, Bristol on 11 Nov 1890.
His body was repatriated and was buried at Deansgrange.

7           George Arthur Wellesley Blacker born 18 Jun 1863 at Rokeby, Blackrock a bachelor
living with his siblings John and Catherine in Christchurch, Hampshire in 1921 died
6 Sep 1936 at Bournemouth and left 44K in personal estate.

4            Leatham William Blacker born 18 Jun 1829 at 10 Fitzgibbon Street.  He joined the
army and attained the rank of Major General, Commissary General.  He married Harriett
D Smith circa 1851 and had at least two children.  They were living at Greenwich,
London in 1891.