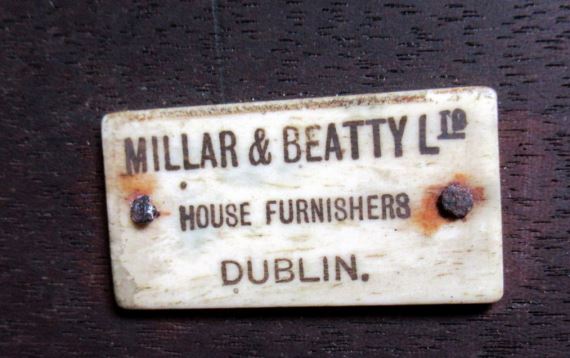 John Beatty born in County Fermanagh was a manager of the carpet department of the Irish Woollen
Warehouse.  In 1851 he went into partnership with James B Millar, another one of the managers and
together they founded the partnership of Millar & Beatty with premises at 16 Dame Street in Dublin
selling branded carpet such as Axminster.  He married Eliza Armstrong, daughter of William
Armstrong on 19 Oct 1854 at the parish Church of Drumholm in Donegal.  In 1859 the firm were also
operating from the old Irish Woollen warehouse premises at Castle Street.  Eliza died 14 May 1862 at
13 Kenilworth Square.  In 1868 they opened new premises at 14 Grafton Street which extended back
to Duke Lane and in 1894 it was further extended back to Dawson Street.  In 1899 they opened a carpet
cleaning works at Long Lane.  They also moved into home furnishing and employed their own cabinet
makers building furniture in both Castle Street and Londonderry.

John secondly married Anna Maria Somers, only daughter of Thomas Somers, of Streamstown House,
Westmeath at Ardnurcher Church, Mullingar on 10 Mar 1864.  John was an amateur swimmer and would
swim from the mainland to Dalkey and back.  They lived at Eversham, Stillorgan from 1880 to 1893 and
in 1882, Anna father died there.  Anna died at 4 Sydenham Villas, Bray on 18 Nov 1894 aged 70.  John
was living with his son John in Sorrento Road, Dalkey in 1901 and died 13 Nov 1902 at St Helier’s, Dalkey.
Both are buried at Deansgrange.

1                   Lewis Handy Somers Beatty born 24 Oct 1868 at Eaton Square, Seapoint was educated at
Portarlington and Lancaster.  He joined the Serpentine Swimming Club and was living at
Sorrento Road in 1901.  Lewis was the Irish swimming champion for 1891/2/3.   He worked in
London and returned to take over as business manager of Millar and Beatty and when it went
public in 1899, Lewis became the managing director.  They designed their own carpets and
held a patent on the patterns and designs. He married Elizabeth Francis Rogers from Devon at
Brentford in 1903.  The firm took part in the 1904 World Fair at St Louis and won a contract
from the Department of Agriculture and Technical Instruction to design carpets to match the
elaborated plaster ceilings in their buildings.  They made replica carpets for the RDS and
furnished the Royal Mail Hotel in Kingstown in 1906.  The family were living at Arkendale Road,
Kingstown in 1911 and Lewis had a car (registration Number IK 158).  He was a member of the
Dublin Chamber of Commerce.   Elizabeth died 9 June 1930 and Lewis died 19 Jan 1933 at
Ailesbury Road, both are buried at Deansgrange.
​
1              John Lewis Beatty born 23 Apr 1904 at St Helier’s, Dalkey and in 1933 took the place
of his father as managing director of Millar & Beatty and as a member of the Chamber
of Commerce.  He married Rachel Muscott, youngest daughter of Roland Muscott of
Eastcote Manor at Meriden on 29 Apr 1937.   John died by his own hand on
11 Jun 1952 at Cnoc Ard, Kerrymount Avenue and was buried at Deansgrange.  Shortly
after his death, the stock and machinery were sold and the trading name was
purchased by Hardy and Company of Newcastle upon Tyne.  In 1959 the premises
were sold, gutted and turned into the Grafton arcade.