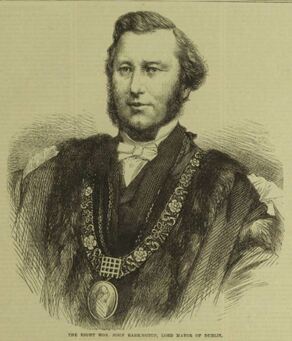 Edward Barrington born 2 Oct 1796 son of John and Margaret Barrington.  He ​married Sarah
Leadbeater on 14 Mar 1822 at Ballitore Meeting House.  Sarah was the daughter of William
Leadbeater and Mary Shackleton the poet and author of the Annals of Ballitore and the Leadbeater
Papers.  Sarah died 7 Dec 1843 at Faddaroe and was and was buried at Cork Street burial Ground.

2                   John Barrington, eldest son born 6 Sep 1824 to Edward Barrington and Sarah
Leadbeater married Elizabeth Pim, second daughter of Jonathan Pim and Elizabeth
Goff of Bloomsbury at Monkstown Meeting House on 22 Mar 1848.  He was a
director of J Barrington and Sons, soap manufacturers and tallow merchants, in
Great Britain Street.  He was a town councillor, a member of the RHS and a member of
the RDS.  He lived at Glenvar from 1862 and moved to Belville on Rochestown Avenue in
1866 to 1869  and to Laughton (St Anne's) in 1872.  He was a director of the Dublin
Commercial Gas Company in 1864 and a director of th Mining Company of Ireland.  He
was the first Quaker Lord Mayor of Dublin and he served twice firstly in 1865 and
secondly in 1879.   He was created Knight Bachelor of the United Kingdom in 1868.  He
died on 2 May 1887 at Santa Severina (Summerhill), Killiney and was buried at Temple
Hill.  Elizabeth died 28 Aug 1900 and was buried at Temple Hill.

3                 William Leadbeater Barrington second son born 20 Jan 1826 at 186 Great Britain Street
graduated BA Trinity.  He was the founder of the Dublin Tramways Company, for the
construction of Tramways introduced into Dublin and was the proprietor and editor of
Saunders’ News-Letter, the oldest newspaper in Ireland.  He was Vice Consul of the United
States at Dublin and at the time of the great Chicago fire was instrumental in raising a
large sum to relieve the distress of the city.  He married Caroline Catharine Starks at Ross,
Ohio and they had 14 children.  He died 15 March 1903 at 2118 Connecticut Avenue and was
buried at Oak Hill Cemetery. He was survived by his wife, two daughter and nine sons.

8                 Selina Barrington third daughter born 26 February 1833 Robert Fennell, a bleacher of
Banbridge, Co Down and son of Robert Fennell a farmer on 16 Oct 1861 at Monkstown
Meeting House.  Selina ffennell died a widow at St Margaret’s (Cornelscourt House), Foxrock
on 18 Jun 1917.  She wrote a memoir on her father based on his diaries.

9                 Charles Barrington, sixth son and ninth child born  5 Oct 1834.  He was a mountaineer and
a horseman.  He was the first climber to reach the summit of the Eiger in August 1858.  His
experience was written in the form of a letter to his brother Richard and was published in
the Alpine Journal of London some 24 years after the event.  He was living at 45 Rutland
Square when he married Louisa Grubb, daughter of Samuel Grubb, a merchant, of Maryville,
Cashel, and his wife Deborah Davis of Waterford on the 22 Mar 1860 at Clogheen in
Tipperary.  (His father's name was incorrectly entered in the register as John.)  In 1870 he
owned and trained the race horse Sir Robert Peel that won the first Irish Grand National.
That same year he donated a gold watch as a winners price for a race up the Sugarloaf.
In September 1879, he sailed on board the Cunard Steamer Algeria to New York as part of
the Irish Cricket team.  He sent regular telegrams to his brother John, the Lord Mayor
updating him on their progress.  He died 20 April 1901 at 18 Earlsfort Terrace and was buried
at Mount Jerome.

14              Richard Manliffe Barrington eighth son born 22 May 1849 graduated Trinity 1870 and was
called to the bar in 1875.  He procured a job as a land valuer for the encumbered courts.  He
farmed at Fassaroe and won many awards for his livestock and produce.  He had a interest in
botany and was also an Alpine climber scaling mountains including the Matterhorn in 1882.
From an early age he was interested in ornithology and in 1882 he undertook a project to plot
the migration of birds resulting in the publication of The Migration of birds, as observed at Irish
lighthouses and lightships including the original reports from 1888–97.  He married Lena Louisa
Richards Gyles, daughter of George Gyles at St Peter’s Church on 26 Apr 1898.  He died
15 Sep 1915 at Earlsfort Terrace.  After his death his collection of stuffed births was donated to
the National History Museum.
​
1                  Alison Innes Barrington eldest daughter born circa 1899 married Jamess F Byrne of
Beechlands, Shankhill and died 24 Oct 1925.

15              Amy Barrington, born 14 Feb 1857, attended Cambridge and studied classics.  She was a
teacher and scientist and was associated with Sybil Gotto and with the practices and beliefs of
eugenics.  She taught in Australia and was the author of many scientific papers on the hereditary
nature of alcoholism and dwarfism.  She died a spinster 6 Jan 1942 at Harlech in Clonskeagh.

16              Marion Barrington, youngest daughter born circa 1859 was an accomplished horsewoman
and a regular winner at the Horse Show in Dublin.  She died at Fassaroe on 26 Jun 1893
and was buried at Glendruid.