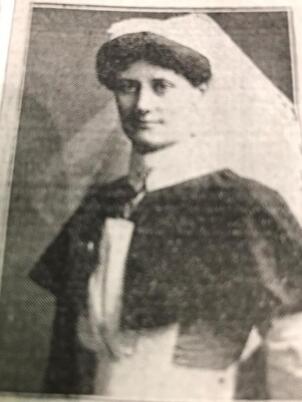 Sister E G Barrett from the Lives of the WW1 website - https://livesofthefirstworldwar.iwm.org.uk/lifestory/4941084
Barrett of Avonmore, Stillorgan

John Chalk Barrett born circa 1803 at Harewood, Yorkshire was baptised 1 Jan 1804 son of
Abraham and Mary Barrett.   John was a commission traveller and married Mary Scott on
16 Mar 1835 at Northallerton.  Mary was the second daughter of William and Mrs Scott of King’s
Head Inn, Northallerton.  John was a merchant with a large flax spinning mill of Liverpool and was
a member of Leeds town council and vice president of the Mechanics Institute by 1850.  He was
managing partner in the Norley Coal Company.  He died 13 Nov 1875 at his residence The Dunes,
Birkdale and left 70K in personal estate.  Mary died 17 Jul 1876 at the Dunes, York Road, Birkdale.

2             John Chalk Barrett born 14 May 1842 was educated at Leeds Grammar School.  A cotton
merchant married Henrietta McCormick at Monkstown Church on the 17 Sep 1868.
Henrietta was the second daughter of John McCormick of Stradbrook House.  He was a
JP and a member of the firm of Smith, Coney and Barret, cotton and general produce
brokers of Liverpool.  John died at Errismore, Weld Road, Birkdale, on 11 Jan 1900 and
was buried at Southport cemetery.  He left his household furniture etc to his wife, the rest
of his estate was to be converted into money, the interest to his wife during her lifetime
and then spit between his three children.  Henrietta was living at 35 Weld Road, Birkdale,
Ormskirk, Lancashire, in 1901.  She travelled back and forward to Dublin on a regular
basis and died at Clifton Lodge, Monkstown on 18 Apr 1926 aged 82.
​
1            John Chalk (Jack) Barrett born 12 Jul 1869 at Fairfield Cottage, Maghull, Lancs.  He
was a broker and India rubber merchant, he also had shares in a colliery and in
Lafayette.  He married Kathleen Mann on 14 Feb 1920 at St Peter's, Eaton Square.
Kathleen was the daughter of William Mann of Sussex.  They lived at Avonmore from
1935 to 1941.  John died at Ayesha, Killiney on 6 May 1946 and was buried at
Deansgrange. He left 49K in personal estate in England and 10K in Ireland.  Ayesha
was sold to Colonel Richard Michael Aylmer after his death.

3           Eliza Gertrude Barrett born 27 Oct 1871 at Fairfield Cottage, Maghull was educated
at home.  She trained as a hospital nurse from 1895 to 1898 at the Adelaide Hospital
Dublin.  She joined the Queen Alexandra's Imperial Military Nursing Service in 1906
and resigned in 1910.  She re-joined and served during WW1 in France and Belgium.
After the war she ran a nursing home.  She was living at 21 Herbert Street, Dublin from
1943 and died a spinster at Merrion Nursing Home on 9 Feb 1968.

3             William Scott Barrett born 28 Nov 1843 was educated at Leeds Grammar School and Liverpool
College.  He married Julia Louisa Colvile on 15 Apr 1869 at Holy Trinity Church, Walton Breck,
Liverpool.   Julia was the youngest daughter of Rev Augustus Asgill Colvile, rector of Great and
Little Livermere, Suffolk.  He was a colliery owner and Ironmaster.  They had four sons and
three daughters.  William lived at Blundellands for 40 years was knighted in 1913 and died in
June 1921.