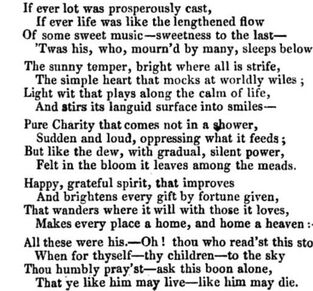 Joseph Atkinson born circa 1743, was a poet and dramatist.  He was a friend of Thomas Moore and
was educated at Trinity.  Joseph joined the army, he served in the West Indies and held the rank of
Captain.  He wrote a topographic poem about Killarney which was published in 1798 and one on
Mount Merrion published in 1816.  He also wrote a number of plays, his first play, a comedy The
Mutual deception was performed at The Theatre Royal in March 1785 and a comic opera Love in a
blaze was performed in May 1799.

Joseph was appointed treasurer of The Ordnance under the administration of the Earl of Moira in
1806 and retired in 1809.   Melfield was their country seat, but was frequently let out.  In declining
heath, he travelled to England to take the waters at Cheltenham.  He died at Cheadle,
Staffordshire on 07.07.1818. There is a plaque in his memory at Monkstown Parish Church and a
monument to his memory at Cheadle Churchyard with an epitaph by Thomas Moore.

1               Joseph Atkinson junior born circa 1791 married Sarah George 2nd daughter of Hon Baron
George and a niece of Sir Rupert George on 20.01.1811 at St Peter’s Church, Dublin.  Baron
George was Recorder of the City of Dublin and Baron of the Exchequer.  Joseph succeeded as
treasure of The Ordnance when his father retired.  He died on 05.09.1861 aged 70 years at
46 Upper Mount Street, Dublin.

2               Jane Maria Atkinson eldest daughter married Rev Thomas Kearney son of the Lord Bishop
of Ossory in 1810 at Leeson Street.  Thomas died in 1853 at Cheltenham.  Will in favour of
sister-in-law Eliza Reid and niece Maria Henn.