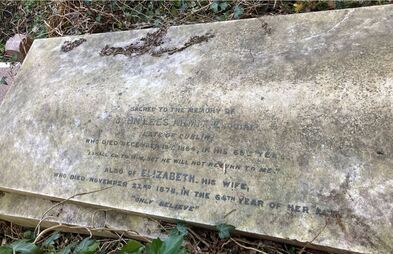 John Armit son of William Armit and Agnes Lee and brother to William Armit of Fitzwilliam
1766-1817.  He was of the firm Armit, Borough and Edington of Kildare Street, Army Agents.
and took on the role of Secretary to the Post Office in Ireland and the Board of Ordnance.
He was a nephew of the late Sir John Lees and cousin to Rev Sir Harcourt Lees and
married Mary Warren eldest daughter of Nathaniel Warren in 1795.

5       Robert Henry Armit 3rd son baptised 02.07.1844 of Ash in Surrey.  Robert became a
naval cadet in 1858 and donated his collection of ethnographic objects, maily spears
and arrows, from Queensland, New Guinea and the Torres Strait Islands to the British
Museum in 1870.  Robert died Australia circa 1891.

When John Lees Armit died in 1835 Newtownpark House was sold in 1839 to Henry Samuel
Close.