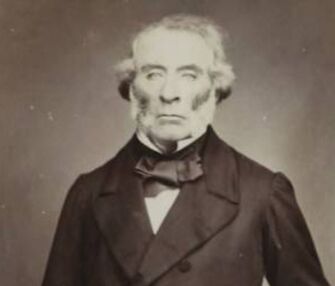 3              James Apjohn, born circa 1796 at County Limerick.  He graduated Trinity in 1817 and MB 1821.
He was MD of Chemistry working at the Royal College of Surgeons in 1830 and published a
number of papers.  He was also part of a team that surveyed and investigated the Mitchelstown
caves when they were discovered in 1832.  He took on a number of commissions including
testing Guano and endorsed a few products.  He also tested the mineral content on land in Joyce’s
Country, Galway for Lords Charlemont and Leitrim to determine was the land suitable for
mining.  He was a member of the RIA and on the Committee of Science and was awarded the
Cunningham medal for his paper Upon a New Method of Investigating the Specific Heat of Gases.  He
made an analysis of a Meteoric Stone which fell near Adair, in the county of Limerick which was
also published by the RIA.  He married Annie White at Doon Church in June 1833.  Annie was the
daughter of Richard White of Kilmoylan, Co Limerick.  He was professor of Mineralogy in 1845
and Professor of Chemistry in 1850 at Trinity.  They lived at Baggot Street for a number of years
and at South Hill on 11 acres from 1858.  He was Chemist to the Royal Agricultural Society of
Ireland in the 1860’s and is credited with having developed the rational formula for determining
the humidity in air (dewpoint).  He also discovered a manganese aluminium sulphate mineral which
became known as Apjohnite.   James died at South Hill on 2 Jun 1886 and was buried at Mount
Jerome.  He left 23K in personal estate, his son in law John Barton was one of the executors.
Annie was a collector of marine plants and in 1855 has a new species named after her.  She died at
Stillmount, Londonderry on 22 Jan 1902 aged 92 at the home of her daughter Rebecca and was
buried with her husband.  James' collection of minerals catalogued by him in 1850 is in the
Geological Museum, TCD.  A painting of James by Sir Thomas Jones was bequeathed by his
daughter Rebecca to the Kings & Queens College of Physicians, Dublin in 1920.

4            Rebecca Apjohn born 19 Mar 1841 at 28 Baggot Street baptised at St Stephen’s Church married
widower Maurice Charles W Hime, Headmaster of Foyle College on 8 Jul 1887 at Booterstown
Parish Church.  Maurice was the son of John Charles & Susan Hime.  One of his sons; John
Godfray Whiteside Hime born circa 1872 to Margaret Robinson at Armagh lived with them.
Rebecca died 17 Sep 1919 at Inishowen aged 78.  A book of verse, called Christmas Roses by
Maurice and Rebecca was published after her death in 1921  Maurice died 11 Nov 1924 at
Inishowen aged 83.