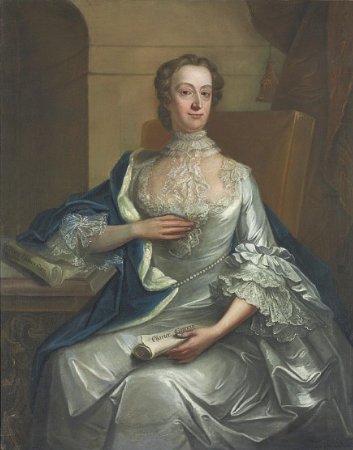 Ellis Agar attributed to Philip Hussey - auctioned at Christies. Sold for £7.5K in 2009
Countess of Brandon

Ellis Agar born circa 1708 eldest daughter of James Agar, MP of Gowran Castle County Kilkenny and his
second wife Mary Wemys.  Ellis married the Rt Hon Theobald Bourke, afterwards Viscount Mayo, in
1726.  Her father died in 1733, and Theobald died in June 1741 and there was no issue of their union.
Ellis secondly married the widower Francis Bermingham, 14th Baron Athenry in 1745, this marriage
produced no children.  Francis died on 4 Mar 1750 aged 58, and was succeeded by is son Thomas from
his first marriage.

In 1758 Ellis was granted the title Countess of Brandon in her own right, for her life only and a pension of
100L per year. She was the first Peeress in her own right.  She had a house at Lazer’s Hill but in 1771 it
went on fire and burnt to the ground and ‘all the rich furniture was consumed’.  She had a house in 26
Merrion Square which had two staircases.  She was a regular attendee at Smock Lane Theatre and visited
London and Paris frequently.  Her house in Lazer’s Hill was on 2 acres of land at Lazer’s Hill which was up
for let in 1782/3 by her nephew the Rev Archdeacon Charles Agar as being lately in her possession. It had
a quantity of building material and mature elm trees.  Its selling point was that that it was convenient to
the new Customs House which was in the process of being built and the probability of a new bridge close
by which would extend the trade of the city.  In 1783 she was living at Newtown Avenue at The Rock and
donated 6 bottles of Cognac to the Black Guards of the Castle who were about to depart the Kingdom.
Her sister Mary, who was the widow of James Smyth, the mother to Rt Hon Sir Skeffington Smyth and
aunt to his Grace the Archbishop of Cashel and to Lord Viscount Clifden died at Stephen’s Green in
January 1786.  Ellis died on 9 Mar 1789 aged 80.  Her obituary described her as ’long admired in the first
circles of England, France & Ireland for genuine wit, elegance of taste, dignity of manners, and superior
understanding’.   After her death 26 Merrion Square, and her interest in the lease of Bellevue, her summer
retreat in Booterstown were put up for sale.